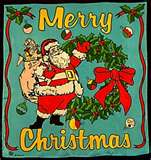 The West Grey Police Service embarked on their fourth annual Christmas Toy and Food Drive. Donations of non-perishable food and new unwrapped toys can be dropped off at the Durham and Neustadt Police stations, The West Grey Municipal Office, Granny’s in Neustadt and Ayton, The Neustadt Brewery, McLeans Home Hardware in Durham, New Orlean’s Pizza in Durham and Village Creations in Neustadt.

Chief Rene Berger says “The sad fact is that many children in our community will not have a single gift to open on Christmas day and we aim to change that and make sure every child has at least one present from Santa to open that morning. Additionally our goal is to assist families in need this Christmas with donations of food.”

Toys for infants and teenagers, both girls and boys are needed this year.

In addition to donation boxes located at various locations in the area, The West Grey Police will also be collecting toys at the Walmart Store in Hanover on Saturday, December 13th and at Christmas in the Village in Neustadt on Sunday, December 7th.

The toys and gifts collected will be delivered to several agencies in the community, who have identified families in need, for distribution.

For any additional information, contact the West Grey Police Service at 519-369-3046.