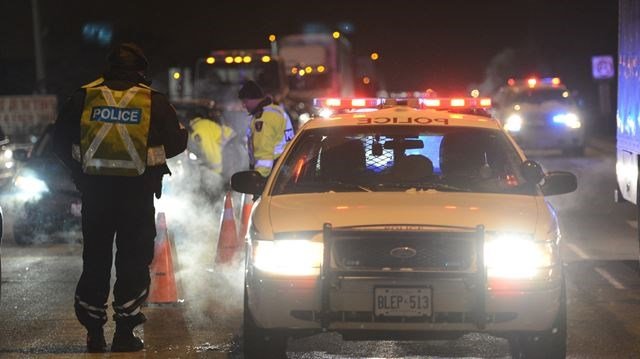 On Monday the 4th day of November 2019 at 6:46a.m, West Grey Police officers were dispatched to attend Garafraxa Street South near South Street for report of a motor vehicle collision that had occurred between a pickup truck and a dump truck. Investigation revealed that the driver of the pickup truck had pulled into the oncoming traffic lane and collided with the dump truck. None of the occupants of either of the vehicles sustained any injuries from the collision.

After speaking with the driver of the pickup truck, it was suspected that the driver was under the influence of drugs. The investigating officer placed the male driver under arrest for Operation While Impaired and transported him to the West Grey Police Station where he was met by a DRE (Drug Recognition Expert.)

The accused’s driver’s licence was immediately suspended for 90 days and his vehicle was impounded for a period of seven days. The male was processed and was later released by way of a Promise to Appear. The accused is set to appear at the Walkerton Courthouse on November 20th, 2019 where he will answer to the charges.

Despite numerous tragedies, whether by alcohol or drug people continue to be found operating vehicles while they are impaired. On suspicion of impairment, an officer can compel a driver to take a Standardized Field Sobriety Test (SFST) or be tested by a Drug Recognition Expert (DRE). It is important to note that for G1, G2, commercial drivers and those under 21, no amount of cannabis is allowed to be in their system when driving. With the holiday season approaching, you can expect to see many RIDE programs being conducted across the Municipality. Our officers are trained and ready to detect impaired drivers and will continue to work with the community to combat impaired driving. If you see someone who you believe to be driving while impaired, call 911.