On October 17, 2020 West Grey Police were advised that two youth were spotted smashing pumpkins in the College St area of Durham.  Other smashed pumpkins were located in the downtown core area the next morning.  If you have any information about these acts of mischief, please call Crimestoppers at 1-800-222-TIPS or West Grey Police at 519-371-6911.

Three separate thefts were reported recently. One is the theft of a dog from a property on Garafraxa St N and another is the theft of a bicycle from an address on George St E.  The bicycle was located behind a business on Garafraxa St S but the dog has not been located at the time of this release. Additionally a  theft of stereo speakers from a locked tractor trailer at an address on Douglas St in Durham happened sometime before the afternoon of October 17th,   Please call Crimestoppers at 1-800-222-TIPS or West Grey Police at 519-371-6911 if you have any information about the thefts.

On October 21, 2020  a 37 year old male was arrested by South Bruce OPP on a warrant for assault.  He was also wanted by West Grey Police and was arrested then released on conditions and will appear in court in December to answer to the charge. 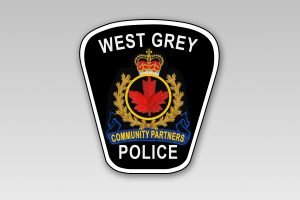