1. West Grey Police Service recovered a stolen 14’ enclosed trailer from a residence in Durham. Investigation has led to the arrest of a 41 year-old male from Ayton who is charged with Possession of Stolen Property Over $ 5,000.00. 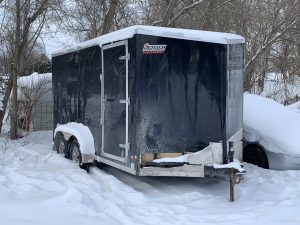 2. While officers effected the arrest as detailed above, an Arctic Cat 440 Snowmobile which was reported stolen on February 9, 2021was located on the property. The snowmobile was recovered and returned to the owner. The investigation into this matter is continuing with charges pending.

3. Later in the day, officers on patrol in Ayton located and arrested a 36 year-old male on outstanding arrest warrants held with another police agency.