During the period of August 12 to August 26, 2021, the West Grey Police Service responded to 159 total calls for service.

On Friday August 13, 2021 West Grey Police Service received a 911 call for help to a residence in the former Township of Bentinck.  When police arrived officers made entry to the property and initiated a Domestic Violence investigation. As a result of the investigation a 49-year-old male from West Grey was arrested and charged with 17 Criminal Code offences.  He was held for Bail Hearing but was later released by Ontario Court of Justice.

On August 17, 2021 members of West Grey Police completed an investigation surrounding a person failing to comply with a release order.  An Arrest Warrant has been sought for the arrest of a 47-year-old male from Hanover, Ontario for 2 counts of Breach of Release Order.

On August 17, 2021 West Grey Police were called to a theft / shoplifting complaint in the Town of Durham.  The suspect had fled the scene on foot prior to police arrival.  The suspect was already wanted on an Arrest Warrant for Theft from the same store on August 9, 2021.  On August 24, 2021 the suspect was located walking on the roadway and was arrested on the strength of the warrant and Reasonable and Probable grounds of the most recent theft.  The accused, a 23-year-old male from West Grey was held in custody, but was later released.

On August 21, 2021 police were called to an area campground after a golf cart was reported stolen.  As a result of investigation and with the assistance of Hanover Police Service the golf cart was located, recovered and returned to owner.  A 51-year-old male from Hanover was arrested and charged with Theft Over $5,000.  He was processed, released and will appear in Ontario Court of Justice, Walkerton to answer to the charge. 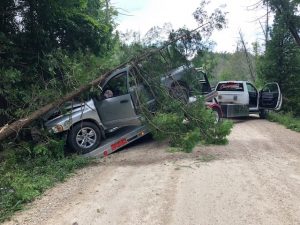 On August  25, 2021 West Grey Police responded to a single motor vehicle collision on Concession 2, Glenelg.  Air bags had been deployed and no driver or occupants were in or near the vehicle.  The vehicle was later reported stolen. Police are seeking witnesses or information to this incident.

West Grey Police responded to 7 COVID 19 related calls for service the past week.

Ontario continues with the Reopening of Ontario. Learn more about what this means for you.